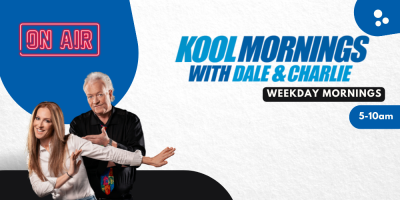 Kool Mornings with Dale and Charlie
Weekday Mornings 5-10am

Charlie is a self-proclaimed “okay mom”, who spends half of her time trying not to embarrass herself and the other half trying to raise two little boys who both appear to have her personality. (Oh, no!)  Her other goal in life, to get them to sleep early enough to have some “me time.”

Dale, on the other hand has no kids and a staggering abundance of “me time”. When he’s not laughing his mornings away with Charlie, he’s balancing the overwhelming duties of an avid traveler, a semi-professional gambler and a hot tub philosopher.

They have their differences, yes, but like Orange Juice and Champagne…they make every morning a great morning.

See Dale & Charlie In the Community

There are so many things we could do, but would we?

True story but a sad one!

But are they really?

There's nothing you can't do! Age is just a number!

Are you failing in the friend department?

Super Mario Bros 3 was the best!

Winterfest 2023 is coming up! Something to look forward to!

And we're not sure how we feel about!

Did your high school have “cliques”?

I miss my Cabbage Patch Kids!

If you loved the ‘Friends Experience” you’ll love this!

Age is just a number, right?

Back to english class!

It's an art thing, not an actual store that just sells bags!

Try and rest up!

Getting Older is the best, said no one ever!

Let's just stop judging each other!

Don’t give me the double thumbs up grandpa!

What is you're FOMO and FOSY?

NOW VERY OUTDATED: 11% OF PEOPLE HAVE NEVER BOUGHT A NEWSPAPER, AND 10% HAVE NEVER USED A WALL CALENDAR

Married men would to if not for their spouse!

QR Codes at restaurnts instead of paper menus!

January can feel like the most draining month of year, bringing with it those famous blues.

If your New Year resolved to try to get more sleep, maybe you should adjust […]

In case you were wondering, these are the most romantic names according to books and […]

Some of these predictions were not far off!

I feel old but at the same time am glad these fads are over!

Why can't four-day work weeks be a thing!

We have on Average 11 Negative Thoughts Per Day!

We all know that VISA bill is coming…

At the end of the year, life may feel extra chaotic.

There are some things you can't avoid!

This may be why you can't sleep!

Alone time will be almost impossible over the holidays!

Depends on the day!

Christmas Magic Peaks at these ages in particular!

I see therapy in these kid's future!

It happens every year!

I want a giant pantry!

Is it really the most wonderful time of the year???

Making snap judgements about people based on their appearance

Humour! It involves wine and chocolate!

On the flipside, why must men leave socks all over the floor?

I've totally google most of these items!

Some are even putting in extra hours before the holidays!

There's nothing worse than getting a snowball to the face!

People are more aware of their sickness post-pandemic!

Congratulations! That's quite a waste of time!

Migraines are the worst!

Try it! But be careful!

They are the "Whatever" Generation!

If you’re going to a New Year’s Eve party this year, make sure you leave within an hour after the ball drops.

Some of these are doable!

Where is the 'Grinchiest' place in Barrie?

They are all ear worms...

I want the old world back!

Do you feel that you're thriving at work?

I like your shirt, isn't the best way to compliment someone

Should All High School Ban Smartphones during school hours?

Do you have a quirky holiday tradition?

Unless it's for a party, don't buy anyone a Christmas sweater!

Warm fluffy socks are the best!

He can’t even put up Christmas Decorations!

Here’s a good thing about getting older- Less Stress!

Almost half of those surveyed say, yes!

We'd be even more exhausted! LOL!

Let's play a fun game of 'Never have I ever!'

Have you started to decorate yet?

Santa is back, pre-pandemic style!

Do you know if someone is trying to 'gaslight' you?