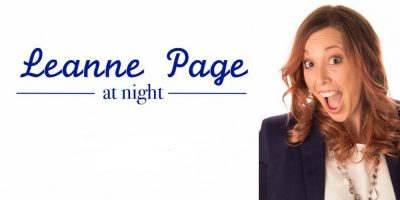 Join Me Sunday Nights from 8pm-Midnight

I’m from the good old town of Keswick, Ontario. (No, I didn’t marry my cousin. And no, I don’t own a ‘Keswick Dinner Jacket’). When I was a kid I played Soccer but used to fake injuries to get off the field. So, naturally, my parents put me in theatre, and that was all she wrote!

I studied Broadcasting: Radio, TV & Film at Niagara College, and after a brief dream of becoming a Sportscaster, I landed my first job in the field in Promotions here at Kool FM. Since then, I have worked at radio stations within Simcoe County and Northern Ontario, until finally coming back home and landing this gig on Kool FM. Right where I’ve always wanted to be.

Wasn't able to wash it out for a month

Can't Go Out? No Problem!

Whether or not you care about the big game, the halftime show is always a MUST-SEE.

The Apple TV+ film to be released Friday

'One More Day' of Trump as President

Sophomore album due out later this year

Practising each of these every morning will put you in the perfect mindset for a great day!

Expected to be released July 2021

We know he can sing, but he CAN'T Dance

A SPECIAL ALL CHRISTMAS EDITION

Your Chance To WIN An Awesome Prize Pack

“Could this BE anymore of a t-shirt?”

Actor Shares Ad Where He Is Naked... Except Boots

This Thanksgiving, sit back in the comfort of your own home and enjoy a scrumptious […]

﻿ The GOAL of this event: • Bring together the local business community • […]

Bring The Yummy of Disney Parks Into Your Home

The wonderful staff at the RVH are under great stress, and it will only get […]

"That was a movie, this is real life"

Let's Get Through This Together... One Sip At A Time

A True Test Of A Relationship

"...with a positive attitude, anything is possible."

Who Will Take Home The Hardware Sunday Night?

8am – 12pm A large assortment of antiques and collectibles priced to sell.

7pm start Join us this summer on our educational walking tour downtown Barrie, where you […]

8am – 4pm Indoor/outdoor yard sale Rain or shine Something for everyone Antiques, wooden signs, […]

8am – 4pm Indoor/outdoor yard sale Rain or shine Something for everyone Antiques, wooden signs, […]

6:00 pm Join us for a memorable evening which will boast an amazing silent auction, […]

7am-2pm Baby cloths to truck accessories, toys and much more.