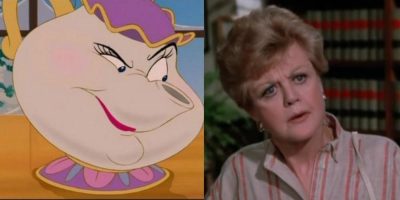 She earned an Oscar nomination at the age of 19 and a Tony award at 83.  In between, Lansbury’s career spanned 7 decades of incredible work in film, on stage and on television.

Her most notable roles include “Murder, She Wrote” and the voice of Mrs. Potts in Disney’s original “Beauty and the Beast!” Honourable mention for her role in Bedknobs and Broomsticks!

‘Murder She Wrote’ Almost didn’t happen!
It’s nearly impossible to imagine anyone other than Lansbury playing Jessica Fletcher, but it turns out the actress wasn’t the first choice for what turned out to be her most famous role. All in the Family star Jean Stapleton was originally offered the part but turned it down, and some reports suggest Doris Day also turned down the role

Cabot Cove’s favourite sleuth is literally in the record books. According to Guinness World Records, the fictional character is the “Most Prolific Amateur Sleuth.”

The record states that Fletcher, “investigated crimes for 265 episodes and four-feature length movies,” and notes that, though Miss Marple, Agatha Christie’s famed sleuth, has spent more years total as an onscreen character in various television appearances, she “has had fewer small-screen cases.”

Lansbury died Tuesday at her home in Los Angeles, according to a statement from her three children. She died five days shy of her 97th birthday.