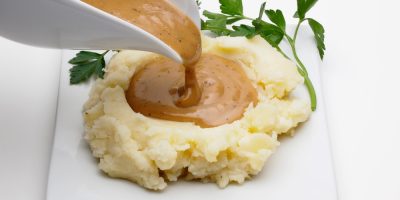 The poll found that almost 75% of people are fans of the brown stuff and will typically have it three times a day!

But consumption is not confined to the home, with 13 percent eating it in the car, 11 percent carrying it in a flask, and 14 percent even taking it on holiday.

Nearly a third claimed they’d rather have gravy than a pint of beer, 29 percent would opt for it over a glass of wine, and one in five would choose it instead of chocolate.

One in 10 put it on ‘everything’, with 11 percent having it on a pizza and 10 percent opting to top pasta with it.

Brits have also confessed to pouring it over pancakes, cereal, potatoes, hash browns and rice.

The research found that the top dishes to enjoy gravy are Roast Beef, Chicken and turkey! These are followed by Yorkshire pudding, sausage, and mash.

The research also found 27 percent of all adults have been known to ask for extra gravy when dining out, 21 percent have eaten it with a spoon, and 14 percent have even taken their mix on holiday.