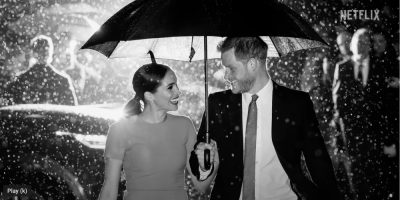 The full Docuseries is out on Netflix and people have a lot to say from both sides of the pond! Prince Harry and Meghan Markle told their side of the story in this six-part series revealing information that we would have known about if not for this series. The main takeaway is that the couple wanted everyone to know about their love story. In the series, however, we also hear about friends and family that are no longer in the picture due to scandal, jealousy and greed.

Meghan Markle’s former BFF Jessica Mulroney may have dropped a cryptic quote about the former friend on social media.

Jessica Mulroney and Meghan Markle were BFFs so much in fact, that Mulroney’s three children were in Prince Harry and Meghan’s wedding.  So what happened?

After the first three episodes were released, many were left asking- where is Jess in their documentary?

Back in 2020, Jessica Mulroney got herself in hot water that saw her TV show cancelled and her husband Ben, voluntarily stepping away from his E-Talk Hosting gig!

In June 2020, Toronto social media influencer Sasha Exeter accused Mulroney of using her “white privilege” to threaten her career in private Instagram messages. During this scandal, Jess referenced Meghan in a post that may have caused the ripple between the two.

Perhaps many were unaware that the pair don’t appear to be tight anymore after Jess posted a message on Instagram “The best thing I ever did was learn how to move without the crowd,” read Mulroney’s message that was posted to her Instagram Story, per Page Six.