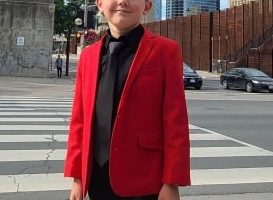 Phoenix Prince is six years old and his pic went viral Friday after it showed him with his dad crying outside the Weeknd’s concert that was cancelled due to the county-wide connection outage from Rogers.

Phoenix was getting lots of attention outside Roger’s centre Friday night before learning that the show was cancelled because his outfit resembled The Weeknd’s attire from his Blinding Lights music video.

A passerby caught the moment on camera and posted it on Twitter, where The Weeknd himself promptly retweeted it. He asked: “can someone please find him for me?”

“The Weeknd retweeted it!”

The Weeknd was set to perform at the Rogers Centre on Friday night as part of his After Hours Til Dawn Tour. But venue officials announced the concert was postponed only 30 minutes before it was set to begin.

Blake, Phoenix’s dad said he and his son had been waiting three years for this concert, as have many fans. The Weeknd’s concert tour has been postponed a few times due to COVID-19.

Fans have been told the tickets will be honoured when the concert is rescheduled.