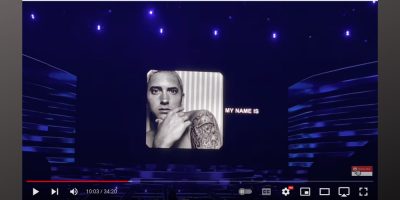 Carly Simon, Eurythmics, Harry Belafonte, and Judas Priest also were honoured at a ceremony on Saturday night. All taking to the stage to accept the honour and give a performance!

Eminem took to the stage with an incredible performance opening briefly with his 1999 hit “My Name Is,” before bringing on Aerosmith’s Steven Tyler to sing the chorus of “Dream On” for 2003’s “Sing for the Moment,” which samples the Aerosmith classic. Then he brought on Ed Sheeran to sing his part on the 2017 Eminem jam “River” as rain fell on the stage.

“I’m probably not supposed to be here tonight for a couple of reasons,” Eminem, wearing a black hoodie, said as he accepted the honour. “One, I know, is that I’m a rapper and this is the Rock & Roll Hall of Fame.”

He’s only the 10th hip-hop artist among well over 300 members of the Hall of Fame. He was inducted by his producer and mentor Dr. Dre, whom he credited with saving his life.

Dolly Parton took the stage “I’m a rock star now!” she shouted as she accepted the honour. “This is a very, very, very special night.”

Parton said she would have to retroactively earn her spot.

Parton initially turned down her nomination months ago because she felt she didn’t deserve it. After all, she was a country artist.

She closed the night with her hit Jolene, accompanied by Pat Benatar and Judas Priest!