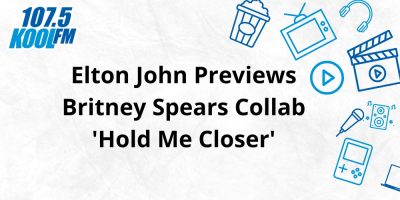 Fans got to hear a little of the highly anticipated collaboration track between these two musical icons on Tuesday when Elton John shared a bit of the track “Hold Me Closer.”

Elton posted a video showing him singing along to the track on the terrace of La Guérite in Cannes, France.

The new version is a reimagining of his 1971 classic “Tiny Dancer.” This will be the first new track featuring Britney Spears since 2016!

The two music icons did not record the song together in person – she recorded her vocals in July and they were mixed with his by producer Andrew Watt.

Elton may be on to something with the reimagining of his classic songs, as exactly one year ago, John released a collaboration with Dua Lipa called ‘Cold Heart’ which was a mash-up of Elton’s hit track ‘Rocket Man’ from 1972 as well as his ‘80s songs “Kiss the Bride,” “Sacrifice” and “Where’s the Shoorah?”

John announced last week that “Hold Me Closer” will be out on Aug. 26.

Spears fans have pointed out that on Oct. 21, 2015 – otherwise known as Back to the Future Day – Spears tweeted: “Tiny Dancer #EltonAlways @eltonofficial.”