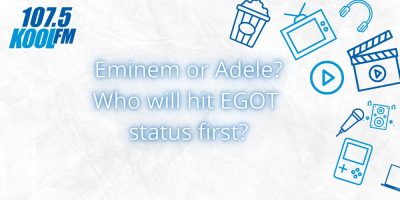 With their wins at the 2022 Creative Arts Emmys, both Adele and Eminem just added one more award to their collection of many, making them one step away from coveted EGOT status.

EGOT status is an elusive acronym for when an artist has won an Emmy, GRAMMY, Oscar and a Tony. One that only 17 people have managed to achieve, the likes of which include Audrey Hepburn and Whoopi Goldberg, and more recently John Legend and Jennifer Hudson.

So, with their recent Emmy wins, multiple GRAMMYs, and an Academy Award for an original song under both of their belts, it seems the only thing missing for Adele and Eminem is a Tony.