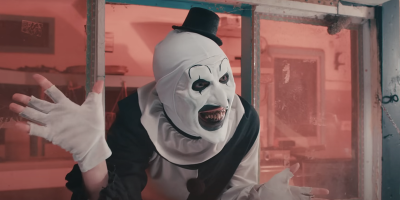 Damien Leone’s Terrifier 2 is a clown-based slasher so violently disgusting that fans are experiencing their own, live body horror in theatres — and loving every minute of it. There have been many social media posts about fans passing out!

#Terrifier2 my friend passed out and the theater called an ambulance. Highly recommended pic.twitter.com/DTrWjpeMO4

To their credit, the team behind the film, clearly anticipated this … er outpouring of enthusiasm. Complimentary vomit bags are handed out at screenings.

But what exactly has everyone so terrified?

Terrifier 2 isn’t filled with traditional jump scares, psychological twists, haunting scores or the threat of the unknown. Instead, it terrifies audiences with extremely violent killings that ignore the rules of basic human anatomy.

The main character, Art the Clown, appeared in a 2008 short by Leone called The 9th Circle and again in a 2011 short film called Terrifier.

Leone then used these shorts while producing his 2013 anthology film All Hallows’ Eve. This was Leone’s directorial debut and the first time that Art appeared in a feature film. In it, kids receive an unmarked VHS while trick or treating. They convince their babysitter to let them watch the tape, containing 3 stories with Art the Clown.

In 2016 Art got his own film – Terrifier. In it, audiences followed Art The Clown as he hunted 3 women on Halloween.

Many argue that the sequel isn’t as scary as the first because fans already have an idea of what to expect. Still, Terrifier 2 has plenty of slasher content for fans of the genre to enjoy.

Fans can also look forward to the return of Samantha Scaffidi as Victoria Heyes and David Howard Thorton as Art. There’s also a brief voice cameo from Michael Leavy, who played Will the Exterminator in the first Terrifier film.

Still on the fence? Check out the trailer below (obvious content warning for extremely graphic violence) …