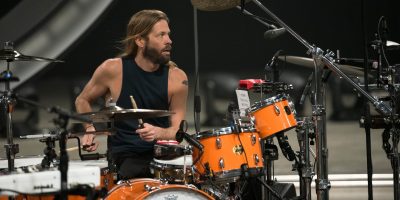 The group was in South America and about to perform at a festival in Colombia on Friday when Hawkins died after complaining about chest pains.

The group was scheduled to perform at the Grammy Awards this Sunday.  It’s unclear if frontman Dave Grohl and other bandmates will appear at the awards to pay tribute to Hawkins.

Following his weather the group put out a state that reads:

“It is with great sadness that Foo Fighters confirm the cancellation of all upcoming tour dates in light of the staggering loss of our brother Taylor Hawkins. We’re sorry for and share in the disappointment that we won’t be seeing one another as planned. Instead, let’s take this time to grieve, to heal, to pull our loved ones close, and to appreciate all the music and memories we’ve made together. With Love, Foo Fighters.”

Hawkins, who joined the band in 1997 after two years as Alanis Morissette’s drummer, was a vital element in the Foo Fighters’ sound and image.