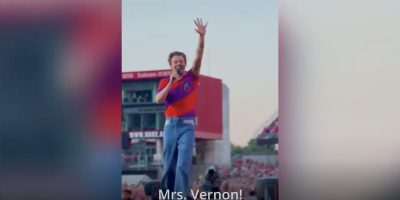 He’s a trooper in the trouser and shook it off like a Taylor Swift Song!

Harry was in Chicago performing at the United Centre.  Harry stopped in between songs to talk to the audience which he routinely does when he was hit by a bottle in a very sensitive area.

There have been several posts on social media that have gone viral showing artists being the target on the stage of flying objects being tossed in their direction.

This isn’t the first time Harry has had something tossed at him while he’s on stage!

Back in August, fans at Harry Styles’ “Love On Tour” stop in New York City began tossing food at him on stage.

Styles previously had to reschedule one of his Chicago shows after his crew collectively came down with an illness.