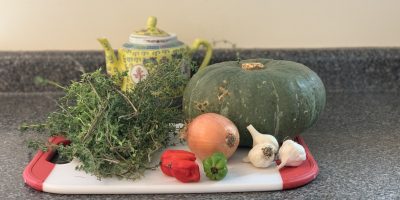 When the weather turns cool and rainy, there’s nothing better than a hot bowl of soup! Making soup is also a lot easier than you may think.

Here’s a recipe for a tasty, slightly spicy, Jamaican Pumpkin Soup. If you’re also Jamaican, you may have a somewhat different recipe. But this is my family’s version.

What Kind Of “Pumpkin” To Use

In Jamaica, we just call this “pumpkin soup”. The “pumpkin” refers to a calabaza squash … a green squash with white spots, NOT the big orange pumpkins you’re thinking about. You can grow Jamaican pumpkins, as my parents do. But it’s hard to find it in stores outside of big city centres. So, you can substitute. The best substitute I’ve found is the Kabocha Butternut Squash which is widely available. 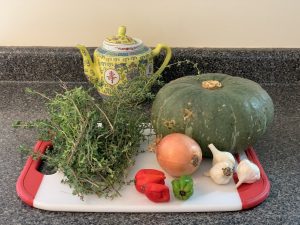 1. Take the green skin off the squash. This might take a while … I first peel it as much as I can with a vegetable peeler, then I use a very sharp knife to cut it into sections, then peel the rest of the skin off. 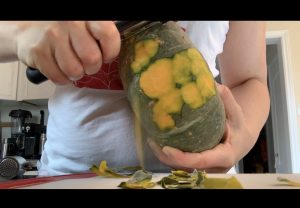 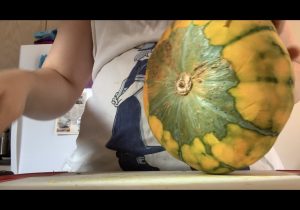 2. Once it’s peeled and you’ve taken out the seeds, cut into the large chunks. Rinse off the pieces and set aside. 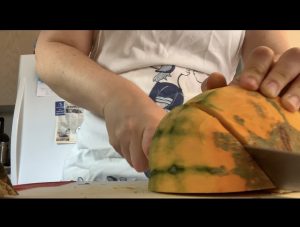 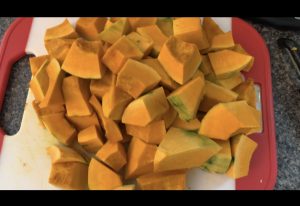 3. Take your fresh thyme and strip off the leaves until you have about 1 1/2 tablespoons of tightly packed leaves.

5. Put the oil in your pot and turn on the stove to medium high.

6. Once the oil is warm, add the onion to the pot and salt generously. Turn the heat down and put the lid on. Cook for about 10 minutes, being careful not to brown the onion. Add some water or stock to the pot to deglaze when necessary so it doesn’t burn.

7. Mince the garlic and add it, along with the thyme, to the pot. Cook until fragrant.

8. Add the pumpkin and enough stock and/ or water to cover. You can make this soup with just water but stock adds a nice full flavour. If you don’t have stock, consider adding diced celery and carrot to the onions and garlic and cook well before adding water. 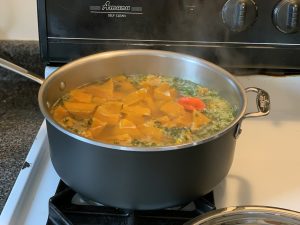 9. Make sure the pumpkin is covered with liquid and then add the two washed Scotch Bonnet peppers. If you like really spicy soup, you can chop up one pepper and put it in.  If the peppers burst in the soup, you will end up with spice! This rarely happens to me but if you can’t have spice, and don’t want to risk it, go to your local Caribbean food store (Happy Mango on Mapleview in Barrie) and ask for “flavour pepper” which tastes like Scotch Bonnet but has no heat.

10. Cook until the pumpkin is soft, remove the whole peppers and, using an immersion blender, blend until smooth.

11. Add salt and pepper to taste. If the soup seems a little too thin, gently simmer it until it thickens.

Cut the pumpkin up in slightly smaller cubes then add diced carrots and potatoes. When the soup is ready, only blend half of the soup and you have a nice chunky version.

RELATED: How many meals can you make without a recipe …

Jamaican pumpkin soup often has chicken in it. It would work best with the chunky variation. You could cook the chicken in the soup by browning it first with the onion garlic and thyme and then letting it cook with the soup. Take the chicken out, shred it then put it back in after blending half the soup smooth.