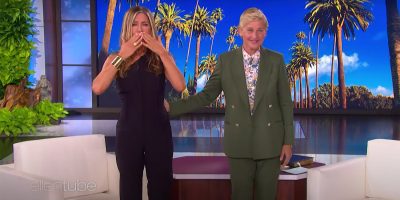 Jennifer Aniston appeared on the first episode of the weekday talk show back in 2003 so it’s only fitting that the “Friends” star book-ends the series.

Pink will also appear in the final show.  Pink wrote the show’s Emmy-winning theme song that aired during season 19.

Related: Ellen DeGeneres Will Hand Out Millions of Dollars in Bonuses To Staff…

The cute cousins Sophia Grace and Rosie – who gained traction after their cover of Super Bass’ by Nicki Minaj went viral – will also appear on the show after Ellen featured them in 2011.

When Ellen announced that the show would be ending, she called it “the greatest privilege of my life.”

“But whatever was happening, my goal was always for the show to be a place where we could all come together and laugh for an hour,” she added. “Being invited into your lives has been the greatest privilege of my life and has brought me incredible joy. Thank you. Thank you. Thank you.”