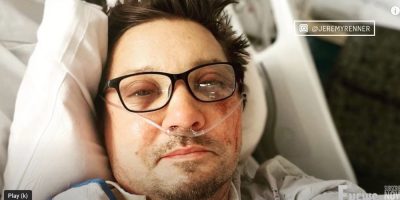 Hawkeye in the Marvel “Avengers” movies is recovering in hospital after a traumatic snow plow injury.  Renner took a selfie and posted an image on his Instagram account thanking his fans for their good wishes.

“Thank you all for your kind words. I’m too messed up now to type. But I send love to you all,” he typed.

Renner’s publicist announced on Monday that Renner had suffered blunt chest trauma and orthopedic injuries in the accident.  Renner was critical but stable as of Monday.

Renner has owned a home in Washoe County, Nevada for several years. This is an area prone to heavy snow. On New Year’s Eve, the National Weather Service issued a winter storm warning. Renner is no stranger to heavy equipment and owns a few machines.

Renner was talking to a family member outside when a 14,000-pound snow plow began to roll. Renner attempted to get back into the driver’s seat before he was run over.

Jeremy Renner was nominated for an Academy Award for best actor for his work in The Hurt Locker.  He also received a nod for supporting actor in The Town.