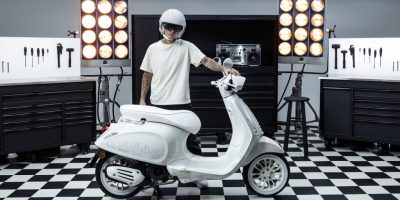 Marked as his first-ever automotive collaboration, Justin Bieber teamed up with Vespa and designed his very own scooter. Because, why not?

Inspired by his love of ‘scooting around Europe,’ Justin got the chance to design a Vespa Sprint, along with travelling accessories and a helmet.

Justin said in a statement, “The first time I rode a Vespa was somewhere in Europe, probably either London or Paris.  I just remember seeing a Vespa and being like ‘I want to ride one of those.’  Being able to express myself, whether it’s through art, music, visuals, or aesthetics, being able to create something from nothing — it’s a part of me.  Ultimately the goal in creating and designing is always to put your own unique spin on things.”

Vespa Spring collaboration officially launches on April 18 in the US and April 20 in Europe.