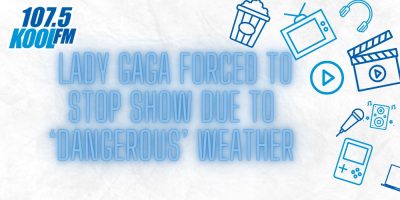 Her final show on her Chromatica Ball World Tour was cut short when lighting started to strike around Miami’s Hard Rock Stadium.  She had six songs left before the storm blew in…

“We just got to stop the show for a minute,” she told the 65,000 fans at the show, advising them to “really calmly move to the inside area”.

Although she had hoped the storm would pass, the concert ultimately had to be called off.

The Hard Rock Stadium is home to the Miami Dolphins and only has a partial roof.

Before the show was cancelled, fans gathered under the sheltered portion of the venue and sang Gaga’s hit Rain On Me – punctuated by terrifying claps of thunder.

The Chromatica Ball tour began in Dusseldorf, Germany, in July before visiting Sweden, France, the Netherlands, the UK, Japan and North America.

With a setlist including Bad Romance, Poker Face, Born This Way, Edge Of Glory and Stupid Love, the show has won rave reviews for its combination of dramatic set-pieces and a running narrative about surviving trauma.