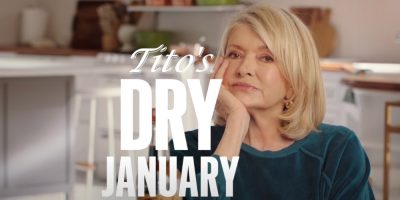 Martha promotes many ways to use Tito’s vodka without drinking it!

Many people try to participate in dry January, the month-long challenge where some people choose to abstain from alcohol.

Tito’s doesn’t want you to waste its booze so they have teamed up with DIY expert Martha Stewart to launch “DIY January,” a campaign that demonstrates how you can still use Tito’s without drinking it and get some household tasks done in the new year.

In a 60-second video, Martha explains various ways you could use Tito’s without taking a swig directly from the bottle.

These include sanitizing a pair of “musty” boots and spicing up her “Friday night” by cutting through dirt and grime using a bottle of Tito’s that has a custom-made spray attachment.

35% of people will take part in dry January while the rest of us watch in a amazement!