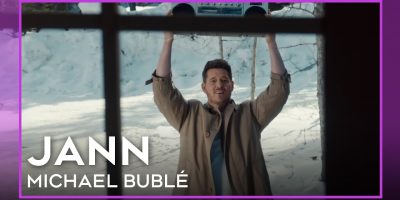 And he won just for being himself!  That’s the best!   Micheal appeared in the season 3 finale of JANN which airs on CTV.

On Thursday, Buble was named the winner of the Best Guest Performance comedy.

The episode, entitled “No Drama,” aired last November. In it, Bublé rides his bicycle to Jann Arden’s home to express his love for her à la John Cusack in the 1989 flick Say Anything.

Buble also played himself back in 2009 on an episode of Corner Gas.