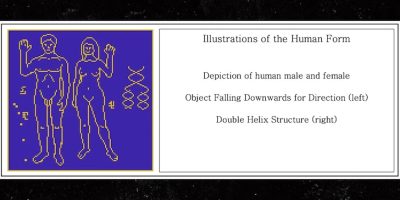 E.T. might want to phone home after this one … scientists are looking to finally get a response back from alien life by sending some cheeky sketches into the unknown.

NASA’s new project, “Beacon in the Galaxy,” is hoping the messages they transmit into space will result in some contact back. One of the things being sent is a nude drawing of a man and a woman … before your imagination runs awry, take a look for yourself.

Scientists hope the simple sketch of 2 naked humans waving “hello” will attract whatever’s out there … it also comes with a drawing of DNA and a representation of gravity.

This isn’t the first time nude drawings have been floating in space … plaques on Pioneer missions 10 and 11 have similar sketches attached to their space crafts.

The string of messages will be sent out in binary code and will include some basic math and physics concepts that can help establish their level of communication.

NASA’s looking for success in project BITG … hopefully, whatever’s out there will stop ghosting us and finally swipe right.