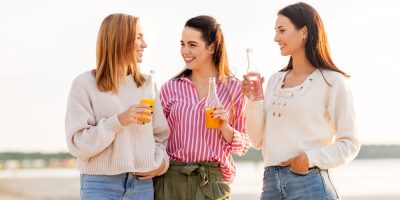 With the holiday season in full swing and “Dry January” around the corner, Canadians who don’t drink alcohol or want to cut back may find more options on menus and store shelves.

Big beer companies have launched non-alcoholic brews, and specialty producers are creating innovative alternatives to spirits for those who aren’t into booze!

Just ten years ago, if you went to a party and weren’t drinking, people just assumed that you were pregnant or sick.

Public perception has changed a lot!

Global Market Insights estimates that worldwide, the non-alcoholic beer market was worth more than US$22 billion in 2022 and will be worth almost double that in a decade.

Insiders are convinced that what happened to craft beers in the last five years, will happen to non-alcoholic beverages in the next 5-10 years also.

WHY PEOPLE CHOSE NOT TO DRINK ALCOHOL

Alcohol addiction
Religion
Health effects it has
Intolerance or allergy

And, in recent years, more people are participating in “Dry January,” where they give up alcohol for the first month of the year.

In a 2021 survey by Statistics Canada, around one in five Canadians said they’ve been drinking less than they did pre-pandemic, and among those aged 15 to 29, one-third had decreased their consumption.