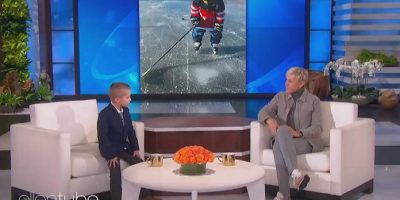 Seven-year-old Callan Perks of Lakefield brought talk-show host Ellen DeGeneres to tears when he appeared on her show today (Wednesday).

The enthusiastic young hockey fan rose to fame after he delivered a rousing speech to the Peterborough Petes before their November 28th game against the Ottawa 67’s.

After the Petes shared a video of “Coach Cal” giving the speech on social media, it went viral and Callan was featured on major networks across Canada and the U.S.

Related: Ellen Will End Her Talk Show This Year…

At the end of his appearance on The Ellen DeGeneres Show, Callan delivered a motivational speech to Ellen, which brought her to tears and earned a standing ovation from the audience.

“I don’t even know you, but you are just a special little being with such a big heart and I thank you for that,” Ellen told Callan after giving him a big hug. “That was the sweetest thing.”