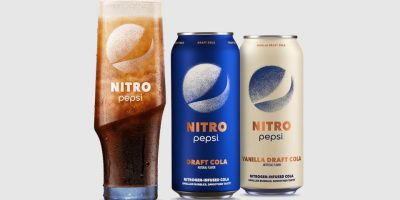 The company says it’s their “most ambitious feat yet,” Pepsi (PEP)Co announced Wednesday a first-of-its-kind nitrogen-infused cola that has a creamier and smoother taste compared to traditional carbonated sodas.

The beverage, called Nitro Pepsi (PEP), is being released in the United States on March 28 and comes in regular and vanilla flavours.

Nitrogen is more commonly used in beer and coffee drinks, like Starbucks’ wildly successful cold brews, as nitrogen gas creates a silky, foamy texture. But since those come out of taps, Pepsi had to come up with a way to maintain the nitrogen in a can.

Introducing #NitroPepsi, the first-ever nitrogen-infused cola. Pre-order now and be the first to try it: https://t.co/hbRVam2lDK pic.twitter.com/15nrAPSrQu

To solve that problem, Pepsi took a page from Guinness’ playbook and added a so-called widget at the bottom that creates a “frothy, foamy, smooth texture unique to Nitro Pepsi.” Guinness patented the widget about 50 years ago, and the nitrogen-filled capsule releases the gas when opened to create the stout’s signature foamy head.

Pepsi’s nitro cola also produces a foamy head when opening the can, so the company recommends a special way of drinking Nitro Pepsi: serving it without ice and not using the straw.