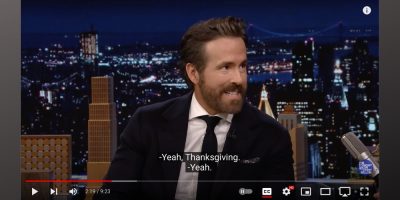 Earlier this month rumours started to fly about the potential bid after the death of NHL owner Eugene Melnyk.

“I do think hockey is interesting to me because I know the rules,” Reynolds, 46, told Postmedia in an interview this week.

Ryan also firmed up his interest in the hockey team while chatting with Jimmy Fallon!

Ryan grew up in Vanier, a neighbourhood in Ottawa’s east end as well as in Vancouver.

Reynolds and his wife have supported the Ottawa community in the past when they donated to the Ottawa Food Bank during the pandemic.

Reynolds told Postmedia that it was his track record of co-owning a soccer team that plays in the fifth-tier of English soccer that makes him cautiously optimistic he could be a success fronting the Senators.

Wrexham is looking to move out of the low-level National League to a higher tier of competition in England.

Forbes magazine currently values the Senators at US$525 million and the Melnyk estate has indicated that the purchaser would need to keep the team in Ottawa.  The purchase could go for more with the lucky buyers acquiring the team for anywhere between US$650 and US$900 million.