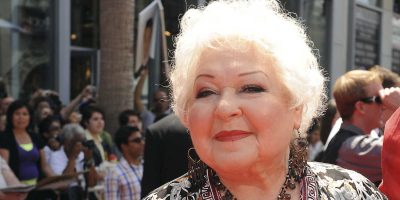 The very talented actress passed away on Saturday from natural causes at the age of 93.

Estelle had many parts over her decades-long career, but perhaps she is best known more recently as Estelle Constanza, George’s mom in the hit sitcom ‘Seinfeld.’  She was featured in 27 episodes between 1992 and 1998.

The best mom in the business.

“It is with the greatest remorse and sadness to announce that Estelle Harris has passed on today, leaving a hole in my heart too deep to describe,” her son Glen Harris told Us in a statement on Sunday, April 3. “Her kindness, passion, sensitivity, humor, empathy and love were practically unrivaled, and she will be terribly missed by all those who knew her.”

Related: Some of ‘Seinfeld’s Biggest Fans Weren’t even Born When The Show First Aired…

Estelle is also recently known for voicing Mrs. Potato Head in the ‘oy Story movies… The actress and comedian started out doing television commercials. She has also been featured in episodes of Futurama, Curb Your Enthusiasm, The Suite Life of Zack & Cody, iCarly, ER, Mind of Mencia, Sabrina the Teenage Witch, Godzilla: The Series and Living Single. The acclaimed actress also appeared in The Mask, Night Stand, Star Trek: Voyager, The Tick and Night Court.

In 1977, she landed her first acting gig in the Jewish drama-comedy ‘Looking Up’.