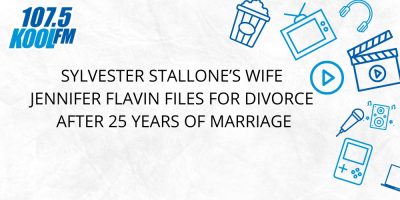 Sylvester Stallone and his wife Jennifer Flavin are divorcing after 25 years of marriage. Flavin filed a petition “for dissolution of marriage and other relief” from Stallone last Friday in Palm Beach County, Florida. The 76-year-old Stallone and 54-year-old Flavin, who began dating in 1988 after meeting at a restaurant in Beverly Hills, California, were married in 1997.  Stallone and Flavin share three daughters: Scarlet, 20, Sistine, 24, and Sophia, 25.

News of the couple’s split comes just three months after they celebrated their silver wedding anniversary. At the time, Stallone captioned a photo carousel of the couple on Instagram in honour of their anniversary: “Happy 25th anniversary to my amazing wife. There is not enough words to describe what this incredibly selfless dedicated, patient, woman has meant to our lives and I only wish they could be another 25! Thank you sweetheart!”  However recently, Stallone fueled breakup rumours after he was photographed with a tattoo of his onscreen Rocky dog Butkus, covering up a tattoo of Flavin’s face he previously had on his arm.

After the divorce filing went public, Stallone said in a statement to People: “I love my family. We are amicably and privately addressing these personal issues.”

Flavin issued her own statement to People: “I’m sad to announce that after 25 years of marriage I have filed for divorce from my husband Sylvester Stallone. While we will no longer be married, I will always cherish the more than 30-year  relationship that we shared, and I know we are both committed to our beautiful daughters. I ask for privacy for our family as we amicably move forward.”