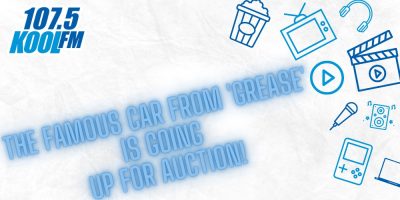 One of the famous car from the movie ‘Grease’ is coming up for auction at the Mecum Auctions event in Monterey, California, on August 20.

The black custom 1949 Mercury known as “Hell’s Chariot” was raced by the villain, Crater Face, against Danny Zuko’s “Greased Lightning” down the Los Angeles River culvert in one of the film’s most iconic scenes.

The vehicle was built by legendary movie car designer Eddie Paul, who chopped the top off of a Mercury coupe to create the menacing hot rod, with its classic flames and a set of razor hubcaps that were used to tear through Zuko’s Ford during the race.

The car has since been used in several advertising campaigns and was featured in the opening sequence of “Grease Live!” on Fox in 2016.

Prior to that, it paraded “Grease” star Olivia Newton-John through Las Vegas to the opening night event for her residency at the Flamingo hotel.

Newton-John signed the car alongside director Randal Kleiser’s autograph on the dashboard, where it remains today.

The car was consigned to the Mecum event months before Newton-John’s death on August 8th and was given a pre-auction estimate of $600,000 to $750,000.