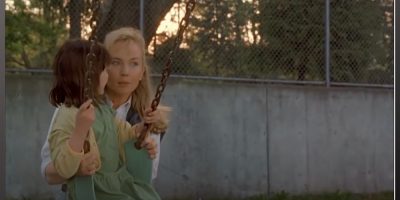 Released January 10th, 1992, this movie is the reason we all contemplated if we really needed a nanny when we had kids.

After her humiliated husband kills himself, an embittered pregnant widow loses her child and embarks on a mission of vengeance against a woman and her family. Rebecca De Mornay plays the crazy nanny widow and does an outstanding job of freaking us out! The film also stars starring Annabella Sciorra, Rebecca De Mornay, Matt McCoy, Ernie Hudson, and Julianne Moore.

The Hand That Rocks the Cradle is a fairly quiet, gently paced drama; there are no jump scares here. But director Curtis Hanson seems to know that the real drama is in watching well-developed characters respond to everyday and highly unusual situations.

If you ever wonder what the term “rock the cradle” means? The definition states: idiom saying. said to emphasize that women have a strong influence on events through their children.

You can watch this 90s thriller on Amazon Prime Video and on Apple TV+.