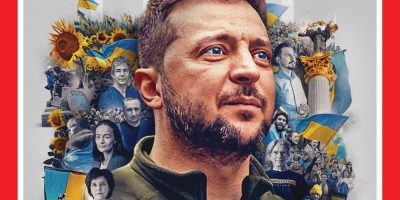 President Volodymyr Zelenskyy and “the spirit of Ukraine” has been named Time magazine’s 2022 Person of the Year.

The annual award by the US magazine’s editors is given to someone who is felt to have had the most global influence during the last 12 months.

Zelenskyy has led his country through the war with Russia following Vladimir Putin’s invasion of Ukraine in February.

Despite international appeals for him and his family to be evacuated to a safe location during the opening days of the invasion, Mr. Zelenskyy stayed in Kyiv with his defence forces.

Time Magazine has revealed the shortlist for its 2022 Person of the Year and we’ll find out later today who will be named!

Every year since 1927,  Time’s Person of the Year has set activists, world leaders, celebrities and epidemic fighters on its front cover, spotlighting their impact.

Last year, Time gave the title to the CEO of SpaceX and Tesla, Elon Musk, calling attention to his rise as a figure in tech through his advancement in automotive and spacecraft engineering.

On the shortlist, this year is Elon Musk once again with a good chance to win the title again for his takeover of Twitter.