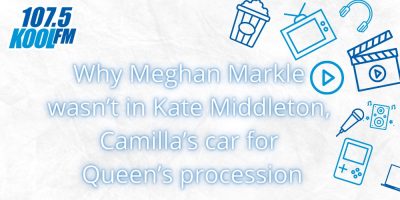 There’s a reason why Meghan Markle wasn’t in the same car as her sister-in-law on Wednesday.

Royal rankings forced the Duchess of Sussex to take a separate vehicle from Kate Middleton in the procession transporting Queen Elizabeth II’s coffin from Buckingham Palace to Westminster Hall.

Markle, rode in the same car as Prince Edward’s wife, Sophie, Countess of Wessex, while Middleton, travelled with Queen Consort Camilla because she is now the Princess of Wales and married to Prince William, the first in line to the throne after King Charles III’s ascension last week.

Royal guards carried the coffin and carefully placed it atop a wooden table for the public to pay their respects until the Queen’s funeral next Monday.