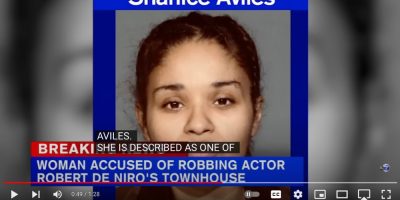 According to NYPD, a woman has been arrested after breaking into Robert De Niro’s home early Monday morning while he was at home.

The woman did not interact with Niro as she was on a different floor, according to police.

The suspect is known to the New York Police Department from previous arrests and is one of the top five burglars in the precinct, the source said.

Law enforcement told CNN, Shanice Aviles, 30, was arrested Monday in connection with the burglary. She had already been arrested twice this month before Monday on various burglary charges in New York.

Officers had been tailing her and watched her walk down a street on Manhattan’s Upper East Side early Monday, trying different doors to commercial buildings before she allegedly broke in through a door of a residential building.