“Twins! Looks like the storm over Lake Simcoe earlier this evening produced multiple waterspouts at once. There’s at least 2 touching the water, but a third funnel cloud to the left of the picture could be another waterspout. Brennen P. Ontario Tornado Watch.”

What is a waterspout?

It’s a columnar vortex or weaker than a tornado over land. Waterspouts are typically attached to a cumuliform coud, cumulus congestus cloud or cumulonimbus cloud.

While they do pop-up over our great lakes, waterspouts typically happen in tropical areas, like Florida. 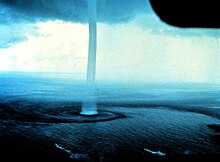