Growing up, my parents would make the ultimate Easter egg hunts for my sister and me. It wasn’t just your average egg hunt where you randomly search the house for chocolate eggs wrapped in coloured foil. Oh no. This was several clues that were on multi-coloured construction paper cut out in egg shapes that would ultimately lead to a prize. And man, did we ever have to work for it! The clues were extremely challenging to the point where it would take us over half the day to complete the hunts. Some years the clues were in different languages depending on what we were studying in school – French, German, Spanish. Yup, my parents were hardcore. But we looked forward to these intense egg hunts ever year because having to work for chocolate somehow made the chocolate taste that much better!

If you’re looking for some last-minute easy egg hunt ideas for the kids this year, here ya go!

Make them use their brain for chocolate! But you don’t have to – just print these clue cards and make up clues that’ll lead them to the ultimate prize!

Or you could make them really work for their chocolate. Get the kids moving in this energetic egg hunt. Write different actions on little pieces of paper that will eventually lead to that chocolate bunny.

Here’s an idea that the older kids will like for a late-night Easter activity!

If you don’t have time to make an egg hunt for the kids this year, that’s totally okay because we’ve got you covered! Just head over to Drysdale’s with the kids, do their egg hunt (make sure to find the Kool FM egg) and you could win a family getaway to Horseshoe Resort! 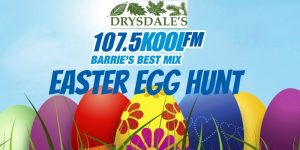 What are some of your Easter egg hunt ideas?

Main Image via Visitor in Victoria