Unless you’re a snow bunny or it’s Christmas Eve, the majority of us live in Canada yet still loathe the upcoming freezing months, especially when you live in Barrie in the destruction path of the lake effect. So, to make your life and our lives easier, we’ve done some research and discovered some insanely clever ways to make your winter slightly less aggravating and just a little easier.

1. Make Your Own Vapour Shower Bombs

Winter in Barrie can be unrelenting.  It’s bound to get chilly (understatement; we know ). When it’s chilly, things get damp and wet and that’s when you (or your kids) get sick. There is nothing worse thank a kid with the sniffles…except maybe a husband with the sniffles.

If you feel those sniffles coming on, try making these vaporizing shower cubes that disintegrate in the hot water of your shower and release tranquilizing vapours into the air.   They’ll be sure to soothe your breathing tubes and relieve some of the itchy, stuffy, sneezy symptoms of a typical cold.  Get the recipe here.

Pro-tip: Skip the Vicks and try making your own out of pure essential oils.

2. Use Vinegar to Keep Windows from Frosting

We told you these hacks were genius right?

At night, spray a solution of 3 parts vinegar to 1 part water on your windows and windshield to prevent ice and frost from forming by morning.

Keep in mind, a way to destroy the genius in this hack is to use hot water (so don’t do that or shield might crack).

Pro-tip: If you come outside to discover your car with a thick layer of ice that elbow grease alone won’t break apart – you can also use this mixture and watch the ice disintegrate before your eyes.

3. Put a Freezie On Top Of the Thermostat

Don’t tell your boss we told you this one but…

If there’s a locked thermostat in your office, put a frozen freezie on top of it.  Thermostats sense the temperature of the air around it, not the air on the opposite side of the building where your cubicle is located.  Trick it into thinking it’s colder than it is, and voila, your office will be warmer, much faster.

4. Beat the Winter Blues by Actually Doing Something

Have you ever noticed the more time you spend outside in the winter, the warmer it feels?  This is called ‘climatization’ and it doesn’t happen if you spend your days inside, hibernating until winter is over.

Barrie has an onslaught of winter events from December through February.  Find something to do here.

5. Put Screws Into the Bottom of Your Shoes

In case Harry or Marv is reading this article, we’d like to point out that you not to put the screws into your shoes while you’re still wearing them.  Also, use very short screws.  We don’t want to be responsible for some new piercings in the soles of your feet.  Making these upgrades to your shoes will help you avoid some potentially dangerous slips and falls while taking your pup out for a walk.

Picture this.  After you’re done scraping your car off to head to work in the morning, your seat is already warm from a DIY rice warmer laying on your seat in wait for you.  You get in, put the sack of warm, delightful toasty rice on your lap as you drive to work.  Bonus, it smells of delicious vanilla spice.  Ah.  That already makes us feel better about driving in winter.

Get the instructions here.

Pro-tip: Add your favorite essential oil and stir into your rice before adding the rice to your pouch and sewing it up.  Not only will microwaving your little rice satchels make your home smell fresher, it will make your car smell nice too!

7. Shave Off Your Sweater Fuzz

If you’re like us, you’re not venturing out into the frozen streets of Barrie on a cold January morning without at least 3 layers, which can be pretty taxing on your clothing.  Don’t throw your sweaters out if they start producing those annoying little fuzz balls.  Simply use a disposable shaver and shave it off!  It’ll look brand new.

The snow from the lake effect in Barrie is very real.  And it can result in you having to get dressed up on a cold Saturday morning to take your pup out for a pee when the sliding back door is frozen shut.   Rather than having a mini-wrestling match with an opponent that’s likely to, literally, shatter – try lining the cracks of your doors with cooking spray.  It keeps the water from resting in the cracks so there’s nothing to freeze in the first place.

9. Make Your Own Drip Station

Instead of traipsing muddy, gritty slush in your doorway and sopping it up with your warm socks later, make your own tray from stones to place your footwear on.  Your feet will thank us later.

When packing up for winter, don’t put your sprinkler away.  The streets of Barrie are fraught with salt from the unrelenting snowstorms and, subsequently, the onslaught of snowplows dropping little, future rust bombs everywhere.  When there’s a warm winter day, put your sprinkler under your car and turn it on to clean underneath your vehicle.

After vaporizing yourself with those bombs in the shower, have a warm cup of this.  The Siracha will ‘loosen’ things up and let you breathe much easier.  The lemon gives you a hit of Vitatmin C, which boosts your immune system.  And the ginger helps you sweat out the toxins in your body.  You’ll be right as rain in no time.

Pro-tip: This makes a tasty Thai broth when mixed with hot water.  You can make a soup and eat your remedy instead!

12. Commit to Taking Up Skiing or Snowboarding

Barrie is an alpine and Nordic skier’s delight.  We’re surrounded by a ridiculous amount of options, and they’re all within a 40 minute drive.  Snow Valley is right in our backyard.  Horseshoe, Mount St. Louis, and Blue Mountain are all basically up the street.  We probably have some of the best options in the province and a lot of us don’t do anything with it.  Capitalize on it and make your winter more bearable.  Once you’re out there, you’ll forget it’s even winter!

13. Join An Indoor Sport In Barrie

Okay, fine.  If we can’t convince you to bundle up and enjoy the outdoors, then take it inside.  Barrie has a number of sports leagues you can join, including dodgeball, basketball, and volleyball.  You can find out more here.

Coming up next in our Winter Survival Guide – Pro Tips From Barrie Locals To Get You To Work On Time This Winter. 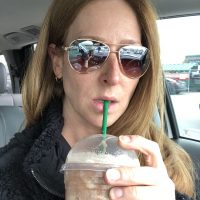